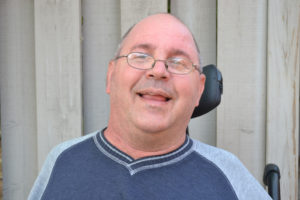 Congratulations to BCFR Board Member, Max Lewis, who will be awarded the Missouri Mental Health Foundation‘s Mental Health Champion Award in June. The Award recognizes individuals living with a mental illness, developmental disability, or in recovery for substance abuse, who make a positive contribution to their community, exemplify commitment and vision, and whose actions have increased the potential for independence in others living with a mental health condition.

Mark Satterwhite, Director of Life & Work Connections, nominated Max for the prestigious award and we would like to share his nomination letter:

With a positive attitude and a will to contribution, Max Lewis doesn’t let disability hold him back. A diving accident in 1986 resulted in the quadriplegia he experiences, and while it limits his ability to care physically for himself, it hasn’t limited his life spirit or his commitment to making the world a better place.

Following his accident, hospitalization and rehabilitation, Max pursued and attained a master’s degree in Health & Wellness. He went on to attend and graduate from the University of Missouri law school and is now an attorney.  Working not for money but for justice, today he works pro bono for people who could not otherwise afford representation. He also applies his legal analytical abilities to advocacy for people with disabilities at the legislative level, conveying to legislators the importance of full community inclusion and dignity in life and work for people with disabilities. He has served as moderator in several public candidates’ forums on disability issues.

Max serves on the Board of the Columbia Housing Authority. A public housing tenant himself, he serves as an unofficial liaison between other tenants and the Board, adding uncommon empathy to the mix in considering matters that impact the lives of tenants. Max serves on the board of Boone County Family Resources, and actively contributes toward their effort to deliver services to people with developmental disabilities in a person-centered, family-friendly way. He also serves on the board of Mid Missouri Legal Services, committed to achieving full access to justice in civil matters for Central Missourians who cannot afford it. He also serves on the board of Mustard Seed, a fair trade retailer benefiting artisans in third world countries.

Several years ago, Max helped establish an adapted gymnastics class for children with disabilities at the University of Missouri.  He runs the class, and expresses gratification to be associated with an effort that builds their strength and self confidence.

With great humility, but also with undying passion, Max Lewis touches and improves the lives of others every day. That’s why he deserves the 2016 Mental Health Champions Award.

Annually, three individuals are selected to receive the Mental Health Champions’ Award and chosen from nominations received from across the state. One recipient is selected from each of the three nomination categories: mental illness, developmental disabilities, and addiction disorders. They are celebrated at the annual Mental Health Champions’ Banquet, held in their honor in Jefferson City, which is scheduled for Tuesday, June 14, 2016. Congratulations, Max!