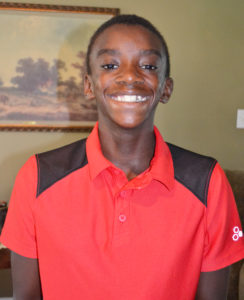 When you spend a few minutes with Fadraon, it is easy to see that he is a confident, active teen with big dreams for his own future. At the time of his interview, school was just starting back up again and Fadraon was excited. “I love school and I can’t wait to go back,” he says. Fadraon is starting seventh grade at Southern Boone Middle School and already has great plans for the year.

The thing he is looking forward to most about seventh grade is trying out for the school basketball team this winter. Last year, in sixth grade, Fadraon worked as the team manager, and since then, he’s been working hard to up his game. He played with an Upward Basketball team, attended the University of Missouri Youth Basketball Camp, and was asked to join a pick-up team for the Show-Me STATE GAMES this summer at which he was awarded two game balls for his performance and efforts. “Basketball is life!” says Fadraon enthusiastically. “I’m going to work hard to make the school team. I can do it. I know I can!”

And that’s not all he’s interested in doing. Fadraon is also hoping to join the school cross country team this fall and the track team this spring. He discovered a love for running after completing the Boone Hospital “Fun Run” program over the summer. His parents, Karen and John, are very supportive of his athletic pursuits and say that Fadraon has been active and enjoying sports for many years – both adaptive and non-adaptive programs. “He’s pretty much tried it all,” says Karen. “Swimming, horseback riding, baseball, basketball, track – you name it. He’s probably tried it.”

Fadraon began receiving services though BCFR in 2005 to support areas of his development such as learning and behavior. Through the agency, he has participated in a variety of services that have evolved with his needs and growth. The agency has purchased various assistive technology devices, therapy support, learning materials and therapeutic recreation services so that Fadraon could attend Camp Barnabas and take part in several Special Olympics sports.Most recently, Fadraon has participated in a social skills group to help him expand his social interactions. The family also utilizes Home-Based Support Services (HBSS) and appreciates the time Fadraon spends with Haley, his HBSS caregiver. “They go roller skating, swimming, play basketball,” says Karen. “She takes him out into the community to do the fun things that he enjoys.”

Karen and John have provided foster care to children with special needs for many years and adopted Fadraon in 2010. “When Fadraon became part of our family initially through foster care, John and I wanted to know everything we could about the best way to support him,” says Karen.

Over the last two years, Karen accessed the agency’s Developmental Disability Education service as she strives to be as knowledgeable as possible in support of Fadraon’s needs. She has become a trainer on the topic of Fetal Alcohol Syndrome Disorder (FASD), and offers workshops on FASD for families and professionals in our community.

“Fadraon is a young man that has learned to persevere through obstacles and limitations and has achieved so much already in his young life,” says Mandy Rooney, Fadraon’s Support Coordinator. “He continues to be successful due to his desire to be independent and the loving support of his family. I am honored to be a part of Fadraon’s team and am anxious to watch him continue to grow and achieve many more goals he sets for himself.”

One such goal, aside from his sports-oriented aspirations, is to work toward living independently someday like his older brother. “I would like to have my own apartment, my own place,” he says. “Or maybe I could live with my brother.” He recognizes that there are skills to learn and things to achieve between now and then, such as managing his own medical care, but he has set his sights high for learning how to do things for himself. “When Fadraon puts his mind to something, he works hard to achieve his goals. John and I are sure he will find a way to do whatever it is he wants to do.”