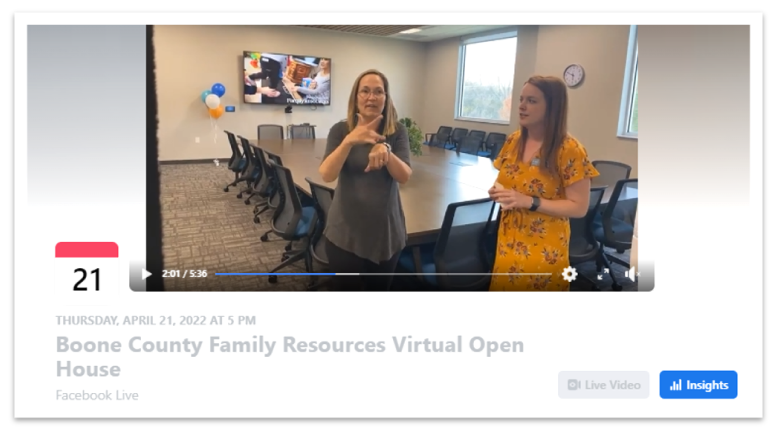 On Thursday, April 21, Boone County Family Resources (BCFR) celebrated the opening and completion of their new Main Office building located at 2700 West Ash Street in Columbia, Mo. The Open House kicked off at 4:30 pm with tours of the building led by BCFR staff. Shortly thereafter, Executive Director Laura Cravens greeted the approximately 100 guests and began a dedication ceremony followed by a ribbon cutting from the Columbia Chamber of Commerce.

All persons served by BCFR were invited to join a Virtual Open House as the event was livestreamed on Facebook. Viewers followed along during the ceremony and were then invited to a tour of the building. An ASL interpreter was shown throughout the entire livestream.

BCFR Staff hand out a local favorite, GOPO popcorn, to guests as they arrive at the Open House.

Director of Supported Living Natasha Sigoloff sits with Site Manager II Hadyn Bailey outside the main office. Sigoloff played a significant role in designing this beautiful memorial seating area made possible by a donation from the Watson family. The dedication plaque includes this quote, “In loving memory of Richard, Joan and John Watson, champions and beneficiary of BCFR’s wonderfully caring staff. With eternal gratitude, the Watson Family.”

Community partners and BCFR staff pose for a photo before taking a building tour.

Former Executive Director Robyn Kaufman — who was instrumental in the procurement, design, and production of the new building — joined Executive Director Laura Cravens alongside the Columbia Chamber of Commerce to celebrate a long awaited ribbon cutting for the new office building.