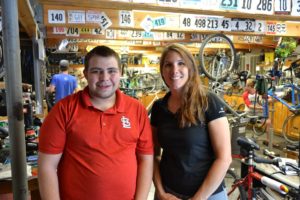 This summer, Harrisburg High School student Aaron and three other area high school juniors and seniors got a jump start on their work histories through a summer program called Career Connections. Aaron is interested in anything sports related, so Community Skills Specialist Sarah Branch investigated sports-related businesses who might be interested in hosting his summer work experience. Walt’s Bike Shop stepped up.

Aaron was referred to participate by the Missouri Division of Vocational Rehabilitation (VR). Life & Work Inc. hired Aaron and served as the employer of record. Walt’s allowed him to work part time for six weeks, agreeing to mentor him through the experience. Community Skills Specialist Christi Brown checked in periodically and was available for consultation.

“I’m happy with my summer job,” says Aaron. “I really like it there.” Aaron’s mother Cinda confirms that sentiment. “He’d wake up actually excited to go to work,” she says. “When at work, he interacted with the staff like I’ve never seen before.  He’s learned a lot.  He’s taking care of his own bike using skills he’s learned.” Aaron, like the three other participants, had had no prior  competitive work experience.

“At Walt’s Aaron was responsible to clean and organize the back stock bike parts and supplies,” says Christi. “He would clean up used bikes to get them ready to be sold. Anytime I went to the store he was working on a project. Sarah Ashman, general manager, shared that having Aaron do the cleaning and organizing tasks allowed the technicians and staff to work on bikes and talk with customers. Aaron has a goal to ask questions when he’s unsure of something. At Walt’s he became comfortable and would join the conversations with other employees as they were working.”

The purpose of the VR-funded program is to expose high school students to a typical workplace as a step in their vocational trajectories toward competitive integrated employment. It spans six weeks of the summer and includes 16 hours of work time and four hours of classroom time, where soft skills for employment and skills for self-determination and transition to adulthood are reinforced. VR as well as Boone County Family Resources are increasingly focused on transition services, as this partnership exemplifies.

Some distinguishing characteristics of the Career Connections pilot from other summer work experience programs include:

Special thanks to VR for helping make the summer a rewarding developmental experience for Aaron and others; as well as to the four host sites: