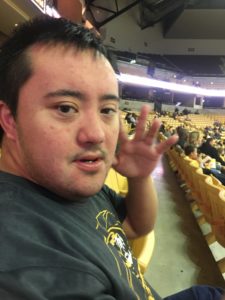 Pablo waves at the camera from the seats at an MU basketball game. He attends both men’s and women’s games regularly.

When Pablo was growing up, he never cared much for sports. His older sister played both softball and basketball. Pablo reluctantly went to the games with his family, but he showed no interest in them. Now, at age 19, he can’t get enough basketball!

A couple of years ago Pablo’s parents were gifted a pair of tickets to the MU men’s basketball game. Pablo’s mom, Yoko, says, “We were worried about taking Pablo to the game. The crowds, the noise—we just weren’t sure he’d like it.” Looking back, she says she’s glad they took the chance and went to the game, because Pablo discovered that he loves college basketball. They have since attended several MU men’s and women’s basketball games and have become real fans.

“Pablo pays attention to the game and actually watches it,” says Yoko. “When his sister would play, he wouldn’t even look up from his iPad. Now he’s obsessed!”

Yoko says during the basketball off-season, Pablo enjoys using the March Madness app on his iPad and he likes to watch basketball game videos on YouTube. “I even use ‘basketball music’ like they play at the MU games to wake him up in the morning,” laughs Yoko. “It gets him right out of bed!” 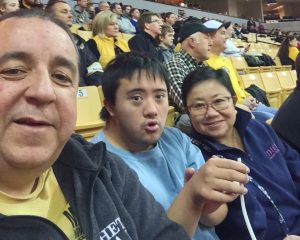 Rafael, Pablo and Yoko take a family selfie at a basketball game.

Yoko says she and her husband, Rafael, have purchased season tickets to the MU women’s basketball games and are considering season tickets for the men’s games, too. “Pablo is very motivated to get to the games,” she says. “Even when the weather is cold. He loves the social interaction and makes friends with everyone seated around him. He also loves the French fries at Mizzou Arena.” Yoko also says that Pablo wants to stay at the game until it is completely over—no leaving early. “He wants to watch every last minute of it,” says Yoko.

Pablo began receiving services at Boone County Family Resources in 2013. He graduated from Rock Bridge High School last year and now participates in the day program at ACT. Yoko says he has many friends at ACT and really enjoys the social interaction there. Pablo is also on the swim team with Special Olympics. “We asked him if he wanted to play basketball with Special Olympics,” says Yoko. “He wanted no part of that. He would much rather watch his favorite teams at Mizzou Arena!”