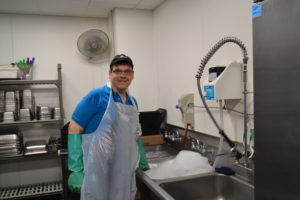 Bryan is happy to be working again and enjoys meeting new people at the hospital.

Bryan takes great pride in being a reliable employee and getting his work done. For more than 20 years, he worked as a dishwasher for a local business. Unfortunately, budget cuts eliminated Bryan’s position and he needed to start looking for a new job.

Because Bryan was motivated to keep working, he was referred by Vocational Rehabilitation (VR) to the Individual Placement and Support (IPS) program at Boone County Family Resources. IPS is a supported employment model for people with intellectual/developmental disabilities operating in partnership with VR.

Through the IPS program Bryan was partnered with Community Employment Specialist, Manny Ortega. Manny, Bryan and his support team talked about the types of jobs that would be of interest to him. Coincidentally, when Bryan lost his original dishwashing position, he began volunteering his time washing dishes at the Harry S. Truman Memorial Veterans Hospital in December. Manny’s advocacy and Bryan’s performance resulted in the conversion of the volunteer position to a paid position at the hospital. This was a dream come true for Bryan who started as an official employee in February!

“Bryan’s supervisors speak very highly of him and are extremely supportive,” says Manny. “They say he is a good employee who gets the work done and communicates well with them.” Bryan says his favorite part of his job is “completing his work, getting paid, and socializing with his friends.” Manny says Bryan frequently eats lunch in the hospital cafeteria after his shift is over and has made friends with many patients and visitors to the hospital.

Manny says that having a job in the community is important to Bryan. Not only is he the type of person that wants to stay busy, but he also likes to be able to take his friends out to dinner for their birthdays. Bryan also is active in his church and it means a great deal to him to be able to tithe and offer support to his church family.

The IPS program began as a pilot in late 2016 and has been instrumental in finding competitive employment for more than 18 individuals served by BCFR. The IPS program is centered around the following principles:

We are excited to see Bryan find employment success with the IPS program and hope this job continues to be fulfilling and enjoyable.