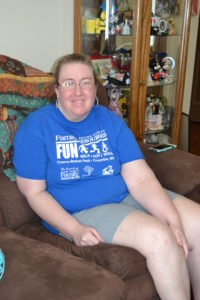 Katie relaxes on her couch in her new apartment.

Two individuals participating in the Supported Living program are gaining the skills they need to live the independent lives they want.

Katie, who has been in the Supported Living program for two years, recently had the opportunity to move into her own apartment. “I really like the freedom of having my own place,” says Katie proudly. “Staff helped me get ready for the move and to live by myself, and here I am.”

Kristi Palmer, the manager at Katie’s apartment building, says, “In addition to working with Katie to move, BCFR staff also assisted Katie with budgeting goals so she could afford to have a dog.” Katie says having Lily, formerly her mother’s dog, living with her makes her very happy. “I love animals so much. I would like to find a job in the community working with animals.”

Katie says staff also helped her apply to use ParaTransit so she can do her own grocery shopping. “My next goal is to save enough money so I can buy a car,” says Katie. Katie says she appreciates the support and guidance she receives from BCFR staff. “They have been very helpful to me. I have grown so much since moving into this building. I have the freedoms I want to live my life.”

Sean has participated in the Supported Living program since 2011. Like Katie, Sean is working on mastering the skills he needs to live an independent life. “I feel like I have come a long way since I’ve been living here,” says Sean. “The staff is great to work with. I have the support I need when I need it.” 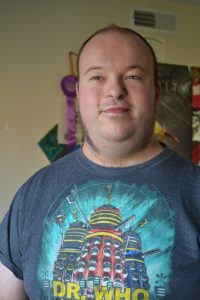 Over the last year Sean worked with BCFR staff to create budgets and ensure bills were paid on time. “Sean has been completing purchases within the community and online, without staff assistance, and now keeps his own ledger of purchases to help him to ensure his balance,” says Hadyn Bailey, the supervisor at Sean’s apartment building. “Sean also successfully worked to self-administer his medication, another skill he wanted to master as this would be necessary for him to live independently in the community.”

Sean lives in his own apartment and says he enjoys being able to relax and enjoy his own space. “I rearranged my furniture so that I have a separate TV room for watching movies and gaming. I have everything set up just the way I like it.”

Sean says someday he’d like to live on his own in the community, but he wants to work on getting his drivers license and save up for a car first. “It would be nice to be out on my own eventually, but I do really like where I live right now.”