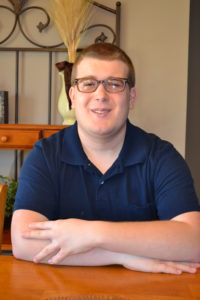 Nicolas is ready to work.

People get jobs so they can live in and enjoy the community. Nicholas was determined to do just that. Working with his support coordinator, Nicholas learned about summer work experiences available to him while still in high school. He chose on-the-job-training with the BCFR summer work crew program where he learned first-hand the soft skills he needed to be ready for community employment. “I learned a lot on the crew. Things like how to work with other people, communicate with my supervisor, and how to follow directions. And I got paid,” smiles Nicholas. His experiences lead him to an interest in the Seamless Transition through Enhanced Partnership or STEP program. 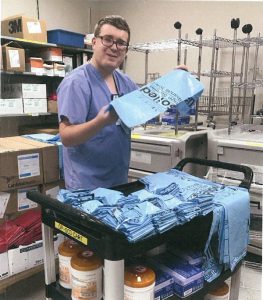 Nicolas working at Boone Hospital through the STEP program.

After graduation from the STEP program, Nicholas and his support team set a goal for finding a job in the community. His support coordinator connected him with ACT Career Services to prepare. By the end of summer, he landed a job at a department store where he was responsible for organizing and sorting merchandise, and preparing new items for the sales floor. Nicholas liked interacting with customers and described his co-workers as being fun and helpful. After the holiday shopping season ended, however, the store did not have enough hours available for what Nicholas wanted, so he is working again with ACT to update his resume and look for another job. “I learned a lot from STEP and working at the department store. Now I’m hoping to find the right job for me.”

Nicholas prefers to stay busy during his day, so while he continues his job search, he has been brushing up on another skill set—cooking. His support coordinator shared an opportunity through a class offered by Services for Independent Living and now Nicholas is learning how to make several meals on his own. “The big goal is to eventually move out into my own place,” says Nicholas. He also enjoys exercising and can often be found running or walking on the indoor track at the ARC. Nicholas says he has also learned how to use the weight machines and is working on building his strength.

When asked what advice he would give to other teens preparing for life after graduation, Nicholas says, “Get some real-world work experiences. Take advantage of the training and the help. It has really helped me.”