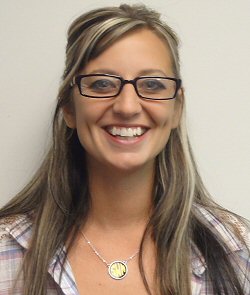 Meet Shana Wilson, Direct Support Professional II with the Supported Living program. Shana began working for Boone County Family Resources right after graduating high school and celebrates her 15 year anniversary this year. In high school, Shana worked with fellow students and her cousin who belong to the intellectual/development disability community. Those experiences sparked her continued interest for helping others in any way that she could. One way Shana did that was through volunteering with Special Olympics. “I loved it,” says Shana. “The smiles and sense of accomplishment that each athlete displayed was so inspiring!” Shana knew she had found her career path. “I was ecstatic to begin working with BCFR and to see where this road would lead me.”

“Each day I come to work  I am greeted with a smile or another means of greetings,” says Shana. “And even though there is a routine that is generally followed you are never sure what to expect for the day.” Shana says she enjoys working directly with the persons served as well as her other job responsibilities. “I have seen so many individuals learn and grow while reaching higher levels of independence.” A highlight of her job is the relationships and friendships Shana has formed with the people participating in the Supported Living program. “Seeing them smiles makes me smile every time!”

Shana is also a devoted mother and wife. Her family is very supportive of her career and know how important the individuals that she serves are to her. Shana is a member of Central Christian Church where she co-teaches one of the Sunday schools classes. “I believe that God not only led me to this job but also led me to the wonderful people I have met along my journey,” says Shana. “My four closest friends I met through working at BCFR.” Shana hopes to continue her journey with BCFR for many years to come.