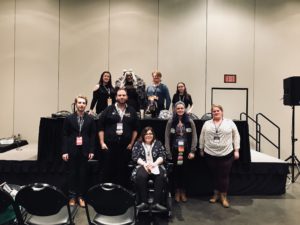 Pictured in the front row center, Jessica poses with the director and cast who performed her one-act play at the BroadwayCon playwrighters workshop in New York City.

While working on getting her undergraduate degree in international studies at the University of Missouri, Jessica took a beginning playwriting class. One of her assignments was to write a one-act play on the topic of her choice. Jessica decided to base her play on the life and times of Austrian Emperor Ferdinand and his family—a subject in which she had much interest. “My professor absolutely hated my play,” says Jessica. “But he did give me an ‘A’ on it. He said even though he didn’t like it, it was well-written. After that, I just sort of forgot about the play. It got tucked away for a while.”

Fast-forward five years. Big fans of musical theater, Jessica and her mom made plans to attend BroadwayCon, a three-day convention in New York City for fans of Broadway shows. This year’s event featured a playwriting workshop with a contest for writers to send in their one-act plays. Only two scripts would be chosen from those submitted. A professional director and actors would then act out the plays and offer the author feedback. “I decided to get out that old play, which I haven’t even looked at in five years, and send it in,” says Jessica. “I waited until the last possible day to submit it. I figured I didn’t have much of a chance.” Jessica says she and her mom had some second thoughts about going to BroadwayCon and almost sold their tickets. “Then I got the email! I couldn’t believe what I was reading. They had selected my play for the writing workshop! I called my mom and told her now we HAVE to go to BroadwayCon.”

At the writers’ workshop, Jessica met the director and all the cast members who performed a reading of her play. “It was a bit strange to hear my words coming out of the actors’ mouths. I discovered that I can be a bit wordy at times,” laughs Jessica. After the reading, the director offered feedback for Jessica. “I thought she would have a lot of ideas for improvements to the script, but she told me it was good as it was. She just had a couple of suggestions.” Jessica said the cast performed a second reading, altering their delivery a bit. “It was so cool to have them acting out the story I wrote.” Jessica said she kept the director’s contact information and plans to re-connect with her this spring when she and her mom travel back to New York City for a vacation. “I plan on making some of the changes to the play that the director suggested. I’d like to show her a draft when we go back.”

Being selected for the workshop helped Jessica realize that she’d like to learn more. “The whole experience inspired me to go back to school. I’m heading back to MU this fall to get my bachelor’s degree in Writing for Performance.” Jessica said she plans to complete the program in about two years so she could keep working while she’s attending school. “I’d like to save some money for the future. Who knows? After I get my second degree, I may want to move to New York. I would love to write more scripts and maybe even try my hand at directing a play or two.”

Jessica says she’s never felt like having a disability has kept her from doing the things that she wants. “I lived and studied in Japan for nine months by myself. If I can do that, I can do anything!”