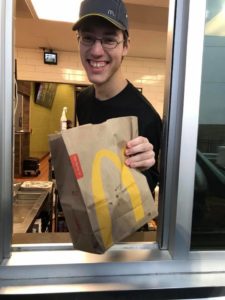 Josh is happy in his new job.

Josh is a junior in high school and has started planning for what life will look like after high school graduation. He took part in the Teens in Transition program last summer—a partnership with the Missouri Division of Vocational Rehabilitation (VR) and the Life & Work Connections program. Through Teens in Transition, Josh got an early start with job exploration and had the opportunity to speak with some local employers.

“Josh is outgoing and social, and made friends with others in the group quickly,” says Sarah Branch, BCFR Community Skills Specialist, an instructor for the Teens in Transition program. “Josh seemed genuinely interested in expanding his knowledge about employment. When we met human resource managers around Columbia, he was the first to shake their hand and ask questions about available jobs. His communication skills will greatly help him with maintaining employment in the future.”

After Teens in Transition, Josh joined the Life & Work Connections Work Crew where he received on-the-job vocational training through working on both the landscaping and janitorial crews. “Josh had a great work ethic and positive attitude every time he showed up to work,” says Jeff Mueller, Program Coordinator and supervisor of the work crews. “He contributed to a positive, motivated work environment with his enthusiasm for getting the job done.” Josh was quickly promoted to the Office Assistant, a more independent position on the work crew. Josh’s mother, Sue says this promotion showed Josh that he could be successful on the job. “That really grew his confidence—knowing that he could do the job on his own,” says Sue.

This new-found confidence lead Josh to an opportunity to interview for a job at McDonalds. He now works there around 17-20 hours a week. He says his favorite part of working there is making money, but Sue says he also really enjoys seeing and connecting with the customers—many of whom he knows personally. Josh can often be found working in the drive-thru window or at the registers where he is able to interact with customers on a daily basis. “Josh is a good problem solver,” says Sue. “He feels empowered to fix issues with customers’ orders and provide good customer service.”

Josh plans to continue to work at McDonald’s while he finishes out high school. He says his dream job would be working as a chef and a server at the HuHot restaurant, but for now he’s happy and enjoying his current role at McDonald’s. “I really give credit to the work crew program at Life & Work Connections in helping Josh see what he’s capable of accomplishing,” says Sue. “It has been a very good experience for Josh.”