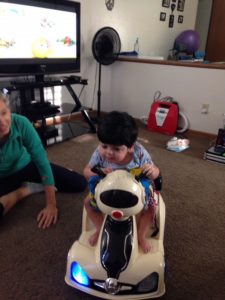 Mustafa tries out his new car.

For three-year-old Mustafa, the freedom of moving on his own is a new concept that he seems to enjoy. Boone County Family Resources funded the adaptation of a typical motorized riding toy and now Mustafa can experiment with movement and explore the world around him from a brand new view point.

“This riding toy introduces a whole new way of movement,” says Gerti Motavalli, a physical therapist who works with Mustafa. “Mustafa can control his movement through pushing on the ‘antenna’ of the toy. He now has the power to move himself from one place to another. This motivates him to learn more movement and reinforces the concept of cause and effect. He has learned if he pushes the antenna forward, he moves forward. If he pulls back on the antenna, he moves backwards.”

Any activity that motivates movement is a positive thing, says Gerti. Mustafa’s mother agrees that he really enjoys riding on his new car. During the warmer weather, Mustafa and his family have also taken the car outside for some cruising around the neighborhood bringing additional new experiences to Mustafa—much different than riding in the stroller.

“There are many things I like about this particular riding toy. First of all, it gives Mustafa the experience of movement in an upright position. Another thing I like is that the steering mechanisms operate exactly like a joy stick,” says Gerti. “The same as how a power wheelchair operates.” 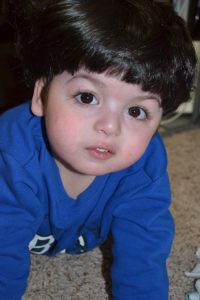 Gerti also said the toy was easily adapted through some minor seating adjustments to work for Mustafa’s needs. This made it much more affordable than some other items being marketed for kids with special needs. One final helpful feature is that the toy comes with a remote control for Mustafa’s parents so they can assist with a safe experience for his independent explorations.

Lori Wilson, Mustafa’s support coordinator, says she worked with Gerti to coordinate the agency’s purchase of the vehicle and the necessary items to adapt it to allow Mustafa to safely sit upright. “Since this was an item that could be purchased through any typical retailer, this was a simple solution to meet Mustafa’s needs.”

Gerti hopes Mustafa continues to enjoy exploring his world from his motorized car. “I think this will help Mustafa build skills and cognitive concepts. Moving independently is a powerful motivator for learning other things, too.”