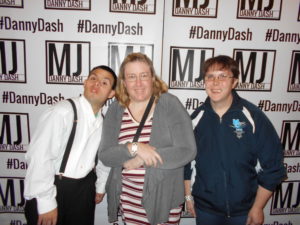 Daniel, Katie and Shaina pose for a picture at The Blue Note before the show started.

Several individuals participating in the Supported Living program enjoyed a special treat in November—a Michael Jackson concert! A Michael Jackson impersonator named Danny Dash Andrews put on a show at The Blue Note highlighting the four decades of music by Michael Jackson. Katie, Shaina, Daniel, Tony and Shelia met up at the venue and enjoyed the performance.

“Katie saw the advertisement for the concert on Facebook and brought it to my attention,” says Alicia Lindsay, a Direct Support Professional II. “She had already talked to Shaina about going, so I helped the two of them purchase their tickets.” The staff in Supported Living shared the information about the show and a few other individuals agreed that it sounded like a fun evening. Soon, there was a group of avid Michael Jackson fans ready to dance the night away. 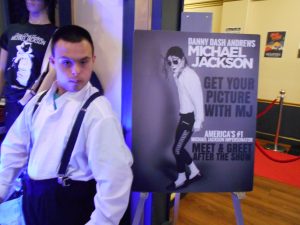 “We coordinated with everyone interested in going and met up at the venue,” says Garrett Hoyle, a Direct Support Specialist. “We sat in general admission up in the balcony and could see the whole stage.” Both Garrett and Alicia said that everyone was very excited about the show. No one had been to a real Michael Jackson concert, so this promised to be the next best thing. Danny Dash performed many of Mr. Jackson’s popular hits accompanied by a light show, additional stage dancers, and numerous costume changes reflecting all of Michael Jackson’s signature looks.

“Daniel thought it was awesome,” says Alicia. “Luckily we were seated on an aisle and he could get up and dance—which he did to almost every song. He sang along with several of the songs, too. He really enjoyed himself!” Garrett said Tony also enjoyed dancing along to the music and really liked the light show. “Shelia didn’t know many of the songs, but she still really had a lot of fun,” says Garrett. “It was great!” 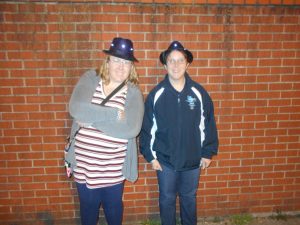 Alicia said Katie and Shaina liked the show so much they bought some merchandise—matching light-up Michael Jackson hats. Daniel bought a poster to hang up in his apartment. “Everyone was really excited about this show and it loved it,” says Alicia. “It was a lot of fun to see everyone having such a good time and making memories together!”