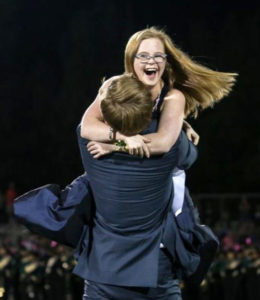 Sydney celebrates with her Homecoming escort the moment she found out she was selected as Queen. (photo courtesy of the Columbia Daily Tribune)

Sydney is enjoying every bit of her senior year at Rock Bridge High School. She likes her classes, participates in several extracurricular activities, including cheerleading, and says she has lots of friends. Those friends nominated her to be a candidate for homecoming queen.

“The senior class votes on the top 50 senior girls for homecoming queen candidates,” says Lisa, Sydney’s mom. “Sydney was thrilled to be included in that group. Then, she was voted into the top 10! We were both stunned and excited.”

In her queen candidate video, Sydney says, “Yes, I have Down syndrome, but I don’t let that stop me from doing the things I want to do.”

“I was excited, but I didn’t think I would get it,” says Sydney. She said she was nervous, but the two week whirlwind of activities leading up to Homecoming night were fun and exciting. Lisa adds that it was also exhausting. Between homework, Sydney’s cheerleading practices and other extracurriculars, Lisa wondered how they were going to pull off all the requirements of being part of the Homecoming Court. “There were pictures, lots of pictures. And then Spirit Week in which the homecoming court was expected to participate each day. That meant finding and coordinating costumes to match each daily theme!” And, during the school day, Sydney was asked to participate in the “Queen Games” which were fun games that the queen candidates played. Sydney chimes in with a grin, “My favorite was the taco eating contest.” Add onto all of this dress shopping for both formal and semi-formal dresses! 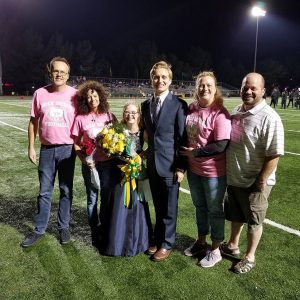 After being crowned Queen, Sydney is joined on the football field by her parents (left), her Homecoming Escort and fellow cheerleader, and the RBHS cheerleading coach and her husband.

Lisa says with some major coordination and some naps thrown in here and there, they managed to make it though the two weeks relatively unscathed. Then came the big day. “More pictures. Lots of costume changes! Not only was Sydney a queen candidate, but she also had obligations as a cheerleader during Homecoming week. That meant her cheerleading uniform got swapped for a fancy dress for the announcements and then back to the cheerleading uniform to finish cheering at the football game. It was exhausting!” But all worth it in the end according to Sydney.

“When they said my name, I just screamed. I couldn’t believe it!” exclaimed Sydney. “It was an amazing feeling. I felt very popular. Everyone knows who I am.” Lisa says Sydney’s entire high school experience has been very inclusive and accepting. “The other kids seem to accept her as their peer and her friends have her back. I think being chosen as Homecoming Queen was the icing on the cake for Sydney. It’s going to be hard to top this year for her.”