For people of all abilities, young and old, having a daily routine is important. Routines help people remember to take care of daily personal needs and to accomplish all the tasks of the day. It also leads to building good habits. Current technology enables tools small enough to carry or wear that assist in reminding users that it is time to transition to the next task. Boone County Family Resources can connect individuals with assistive technology devices which can increase the independence of a person with a disability in their home and in the community. 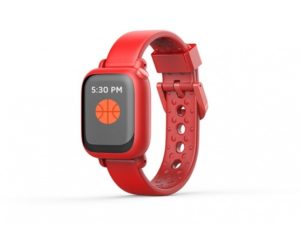 The Octopus Watch is one such technology tool that Katherine definitely wanted to try using with her son Zachary, age 7. At home they were struggling with transitions between activities and staying on task. Zachary’s support coordinator, Kara Schnell, introduced the family to the Octopus Watch and encouraged them to give it a try. “I found the watch while researching options for assistive technology devices to help kids with their daily schedule,” says Kara. “I shared the information with Katherine to see if it was something she’d like to try with Zachary and she agreed that she thought it would be a good fit for him.”

The Octopus Watch is designed for kids ages three and up and uses both visual ques and optional vibration alerts to let the wearer know it’s time for a new task or activity. Parents or caregivers can program the alerts using an app on their smart phone. With more than 700 colorful icons available, parents can set up schedules to help the wearer get organized and stay on track during the day building good habits, independence, and self-esteem. The app also allows parents to see if the scheduled activity has been completed. Additionally, a gamification element of the watch also rewards the wearer with electronic badges for completing tasks for the designated time and duration.

“The ‘rewards’ aspect of the Octopus Watch makes it a good fit for many kids,” says Kara. “They feel like they’ve accomplished something and the positive reinforcement helps form the good habits we’re trying to build.”

“Zachary loves the watch. He is a very independent child and very schedule-oriented,” says Katherine. “This watch is a great compliment to him. If the watch alerts him to do something, he does it. We’ve programmed it with all his daily activities, and now, instead of us telling him what comes next, he tells us!” Katherine says the watch gives Zachary the feeling of control over his own schedule and has empowered him to be even more independent. She says, “If I remind Zachary that it’s time to get ready for bed, he consults the watch and lets me know he still has a few more minutes until it’s time to start that activity.”

Kara says she’s recommended the Octopus Watch to another family she works with who echoes Katherine’s comments about it’s usefulness. “My other family that uses the Octopus Watch says it has made a huge difference in their lives,” says Kara. “They were previously using picture schedules for their child, but were constantly having to remind their child to check the schedule. They felt like they were endlessly repeating themselves. The watch has greatly improved the scheduling and transitions between activities and boosted their child’s independence.”

For older kids who can read, the WatchMinder watch is another assistive technology option. It does not have a companion smart phone app, but it uses simple on-screen programming to set up alarms and reminders for the wearer.