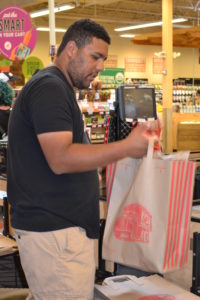 Isaac bags groceries at Lucky’s. He says he enjoys interacting with the customers.

In October, we’re not only celebrating National Disabilities Employment Awareness Month, but also the one-year anniversary of the Individual Placement & Support (IPS) program. The supported employment pilot program with Missouri Division of Vocational Rehabilitation has resulted in competitive employment outcomes for 11 individuals with intellectual and developmental disabilities. The evidence-based program helps put people interested in working into competitive jobs on a rapid timeline for achieving successful employment.

Isaac chose the IPS program to help him find a job after completing the Self-Determined Transition Readiness Through Individual Vocational Experiences (STRIVE) program at the Thompson Center. Through STRIVE, Isaac worked on goal setting, resume building and took on a temporary position as a ticket-taker at University of Missouri Athletics. He believed he was ready to find a competitive job.

Once Isaac was referred to IPS, Life & Work Connections Community Employment Specialist, Rachel Murphy, began working with Isaac immediately on determining the type of jobs he was interested in. “Isaac determined that he wanted to work around people, he wanted to be on his feet, and he wanted customer interaction,” says Rachel. “From there we zeroed in on jobs that met those criteria such as hospitals, grocery stores, retail stores and sports.”

Isaac decided he wanted a job in a grocery store and worked with Rachel on how to interview. “IPS opened my world to different kinds of jobs,” says Isaac. “I already had a resume and knew how to apply for jobs online, but Rachel helped me learn what to say/what not to say in interviews. That was the most important thing I learned.”

Less than six months after working with Rachel, Isaac landed a job as a courtesy clerk at Lucky’s grocery store. “I bag groceries and bring carts in from the parking lot,” says Isaac. “I also make sure the carts are neat and have no trash in them.” Isaac says he is happy with his position and his favorite part of his job is his co-workers. “I have great co-workers. I like working with the students.” Isaac also says he likes moving around a lot and not having to stand in one place.

“Isaac was very determined and was excited about getting a job,” says Rachel. “He knew what he wanted to achieve and didn’t give up until he got the job he wanted.” Rachel reports that with his flexible schedule at Lucky’s, Isaac is also able to continue working with the MU Athletic department when he wants to. “If there’s a event or game that happens to work with Isaac’s schedule at Lucky’s, he can choose to take that shift and make a little extra money.”