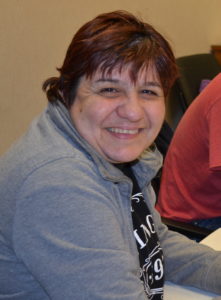 As Bosnian refugees, Alisa and her family came to the United States to seek a new future. Alisa, age 45, began receiving services through Boone County Family Resources ten years ago when her family moved to Columbia. With both parents working at that time, Alisa began services with Life & Work Connections Community Skills Specialist, Christi Brown, and started the Day Program at ACT. She generally did not go anywhere else unless she was with her parents.

“When I started working with Alisa, we focused mostly on taking medication independently and managing money,” says Christi. “When her mom retired and went to Bosnia to visit family for a couple of months, Alisa took charge of her own care and managed the home while she was gone. After Alisa demonstrated that she had learned a lot of independent skills, we began to focus on getting her out in the community more. That’s when we started working on learning how to use Paratransit.”

Another goal Alisa had was to become more physically active. She joined the Transition Network class, Fitness Achievers, and began to use Paratransit to get herself to the twice weekly classes. Christi would meet her before the bus would come so she’d have someone with whom to wait. Christi also worked with Alisa on using her cell phone so she could call her parents while she’s waiting or to let them know she was on her way home. After some practice, Alisa now feels comfortable waiting alone for the bus and also volunteers to wait with others for the bus. 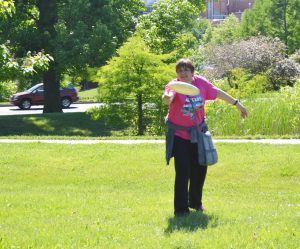 “Alisa used to get anxious to ride the bus alone,” says Sarah Branch, Community Skills Specialist at Life & Work Connections and instructor for the Fitness Achievers class. “Now she is confident and calm. She had a late bus to one class recently, but knew she could call me to find out where our group was. She handled it like a pro and even laughed about it later.”

According to Sarah, Alisa is feeling more comfortable in her community. As part of Fitness Achievers, Alisa often suggests local parks and trails for class. “She is always the one who is willing to try new places for class. Alisa wants to branch out and try new activities, too.” She also has seen another benefit of attending Fitness Achievers. Since joining the class, Alisa has lost six pounds, drinks water all the time, and is learning that healthier food choices make her feel better physically.

“I definitely see Alisa as a success story,” says Sarah. “She is so much more confident after overcoming the things she was anxious about. She’s a tough woman. I think she’s learning that she can take care of herself. She definitely has a bright future ahead of her.”