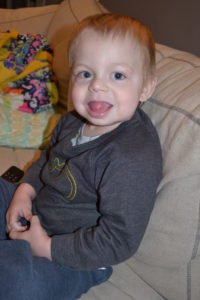 Xander, age 3, pauses for a smile while watching his favorite show.

Nutrition Services are offered through Boone County Family Resources to assess a person’s nutritional history and dietary intake, to evaluate feeding skills and feeding issues, to develop and monitor plans to address nutritional needs and to help with food habits and food preferences. Support coordinators at BCFR can connect individuals to dietitians who will work to help find the right combination of supports to assist in meeting nutritional needs.

Xander was born in 2014 with a rare genetic disorder. The disorder is characterized by an enlarged tongue which can cause breathing and feeding issues. The disorder also makes Xander much more susceptible to developing cancer than a typically developing child. In fact, he has had liver cancer twice in his young life. After his second bout of cancer and a second liver transplant, Randee, Xander’s mother, said they were struggling to get him to eat enough. “He was just so little, just skin and bones. We needed some help to try and get him to start gaining weight again.” At that time, Xander was receiving services through the First Steps program who connected the family with a nutritional services provider. “Our dietitian has been very helpful in trying different combinations of food to get Xander to eat. Now look at him,” she laughs. “He’s such a big boy!”

After transitioning out of the First Steps program, Xander was able to continue seeing the same dietitian. “It has been really nice because we have been through so much with her and she knows Xander,” says Randee. “Also, she has been very receptive to our desire to try and use natural solutions as much as possible. For example we’ve tried some flax seed oil to relieve constipation and we’ve changed formulas to one that contains less sugar and added ingredients. It’s been good to see him make progress. He recently figured out how to drink with a straw and he’s obsessed with it!” 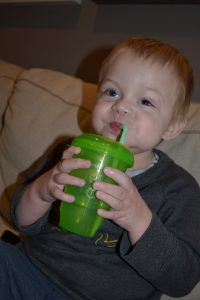 Xander loves drinking water from his cup with a straw.

Xander started attending preschool this year at the Early Childhood Education Center in Columbia. “He loves school,” says Randee. “All of his therapists work with him while he is there. He is having fun and learning so much. I can’t believe how many new words he’s picked up.” Randee says Xander has grown more independent at school as well. “When I go to drop him off at school, he just says, ‘Bye, Mom!’ and takes off down the hall, ready to start his day.”

Even though he was a bit under the weather at the time of this interview, Xander was happily handing out high fives and hugs while he watched his favorite “Tow Mater” show on repeat. “He is just a big bundle of energy,” says Randee. “He keeps us on our toes. We’re thankful for all the providers that have helped us along the way.”