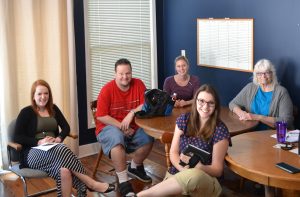 Matt is enjoying his job at Texas Roadhouse where he’s been working since last fall. He is another successful person employed through the Individualized Placement and Support (IPS) program—a partnership with Missouri Division of Vocational Rehabilitation (VR) and BCFR— in which persons with intellectual or developmental disabilities who want to work are put on a fast track to community employment.

Matt was referred to the Life & Work Connections program late last summer to develop skills for getting and keeping a job in the community. He began working with a Community Skills Specialist in September. By October, the partnership between VR and BCFR was finalized and Matt was the perfect candidate for the IPS program. He worked with Community Employment Specialist, Rachel Murphy, to identify possible jobs that would interest him and he began applying. In no time, Matt had landed a job.

“When we began working together, Matt already had several ideas of where he might want to work and what he might want to do,” says Rachel. “He filled out the applications on his own and he and I talked about interviewing and if he wanted to follow up with where he applied. Before we knew it, he was interviewed and had accepted a position!”

Matt currently rolls silverware at Texas Roadhouse before the restaurant opens for the dinner hour. “He focuses on rolling as many bunches of silverware as possible each shift,” says Sarah Branch, a Community Skills Specialist with the Life & Work Connections program. “Matt gets along with his coworkers and enjoys going to work each day. His supervisors are supportive of his needs and report that he is doing fine.” Six months into this job, Sarah says Matt also has set a goal of doing food prep and has aspirations of one day becoming a manager. 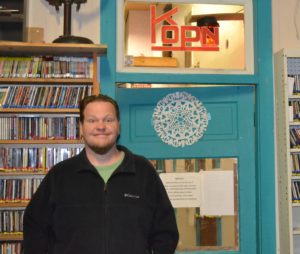 Matt poses for a picture in the “green room” at KOPN before his monthly radio show.

When Matt is not working, he hosts a radio show at KOPN called “Rockabilly Corner” the first Tuesday of every month. Matt is not sure how long he has volunteered for the radio show, but thinks it has been about 15-16 years. During the show, he plays music from the 50’s, including old country. Matt talks about each artist before playing the songs and sometimes does live interviews with artists like Chuck Mead from BR549 and Lee Rocker from The Stray Cats. “I enjoy the radio show because I can play old music and let people know it’s still out there and still popular,” says Matt.