By Laurie Ritter and Natasha Grayson 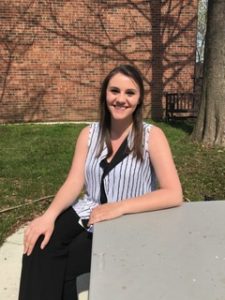 In October 2016, BCFR partnered with Vocational Rehabilitation (VR) to launch the Individual Placement & Support (IPS) program. IPS is an evidence-based program developed by Dartmouth College to assist individuals with mental illnesses gain employment in their communities. BCFR and VR are piloting Missouri’s first IPS program for people with intellectual and developmental disabilities.

A vital piece of IPS is the staff that assist the individuals with preparing and finding employment. Rachel Murphy is an Employment Specialist with the Life & Work Connections program and the first in this role at BCFR. Rachel started working with BCFR in January 2016 and reports that she “love, love, loves” her job. Rachel began her career with BCFR as a Life Skills Trainer then transitioned into her new role as the Employment Specialist when the partnership with VR and launch of IPS began.

Rachel says she and her teammates “hit the ground running” and currently have 15 persons served participating in the IPS program, with 9 people successfully hired in competitive jobs. Rachel likes networking with the potential employers and following job leads. She says that she enjoys seeing her client’s excitement and sense of achievement when they find out that they have a job interview. Rachel’s personal goal is to assist at least one individual per month gain employment. She is also excited that an additional Employment Specialist was hired so they can help more people find jobs.

Rachel is an identical twin and also has a younger sister. She graduated from Penn State with a degree in psychology in 2015 and is passionate about advocating for people with disabilities.