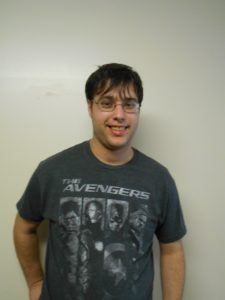 Ryan recently moved into an apartment in the Supported Living program. He’ll turn 24 in May and says that he really likes living on his own. He and his roommate seem to get along well and are even on the same basketball team. “We live together and we play ball together,” says Ryan. “It’s all good.”

“We’ve enjoyed having Ryan move into the building,” says Kristi Palmer, Site Manager at Ryan’s apartment building. “He has established a great connection with his neighbors.  It’s especially fun to hear his fun sense of humor come out!”

Ryan works at the Thompson Center on the janitorial team three days a week. He says he likes the work he’s doing. Ryan previously worked on the Life & Work Connections Janitorial Crew and says his time on the BCFR crew helped him get his current job. “I already knew how to do the job, so it was a good fit.”

To say Ryan is a sports fan is an understatement. When you sit down to talk to him, be prepared to discuss which baseball players have recently been traded from his favorite team, the Kansas City Royals, or to discuss the results of the 2015 World Series. Ryan also enjoys watching other professional sports like football and basketball. He also knows the upcoming schedule for the University of Missouri volleyball and gymnastics teams and especially likes to attend sporting events at Mizzou. “The teams are mostly good and it is fun,” says Ryan.

In addition to following sports closely, Ryan also likes to play several sports for Special Olympics. Basketball season is winding down, but then he moves on to volleyball this spring and softball this summer. “I like to play and it’s fun,” says Ryan. “It’s something to do.”

When he’s not working or playing sports, Ryan likes watching movies with his roommate in their apartment or visiting with his neighbors. His favorite movie to watch is Harry Potter but he also likes any movie about sports – which isn’t too surprising.

“Ryan has really come out of his shell since moving in,” says Kim Tolson, former Site Manager. “He was initially pretty quiet and now he is social with everyone and jokes around on a daily basis.”

Ryan has a brother and two sisters and his parents live in Ashland, so he is able to visit them frequently. “Living here is nice,” he says. “I like it and I’m happy here.”