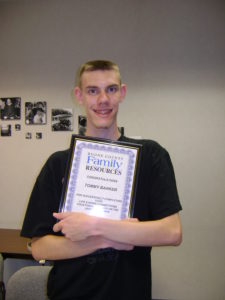 Tommy has a lot to be proud of these days. He has a job he enjoys and he passed the test for obtaining his driver’s permit. He recently turned 21 and says, “I feel like I have accomplished a lot.”

Tommy has been served by Boone County Family Resources since 1997. He was referred to Life & Work Connections in 2013 to pursue learning the skills he needed in order to find a job. He participated in both the Janitorial and the Landscaping Crews. “I think it helped me get ready. It gave me an idea of what being in a job would be like.”

Through assistance from JobPoint, Tommy successfully landed a part-time job at Pizza Hut. His typical day consisted of folding up take-out pizza boxes, taking out trash, some prep work and doing dishes. Although he liked his job, he wanted to contribute more and be more of an equal with his co-workers. Tommy worked with Jeff Mueller, Life & Work Connections Program Coordinator, to learn the skills necessary to become a cashier. “He worked with one of his managers at Pizza Hut to learn their register system,” says Jeff. “He practiced after his shift was over by entering and paying for orders for his own food. Eventually, he felt confident enough to talk with his manager about trying out his new skills during his shift.” Tommy says he enjoys taking orders and working in the drive-thru, and appreciates that his managers and co-workers are supportive. “They are usually okay with me asking questions, as long as we aren’t super busy. I get along with the people there real well. That’s why I love the job I have. One of these days, I might have to go full-time!”

Another big goal Tommy achieved was getting his driver’s permit. He and Jeff worked together on the skills needed to pass the exam by training with several online practice tests. “He was nervous about taking the test,” says Jeff. “But when he finally got his chance to take it, he passed.” Tommy says this has been a goal of his for a while. “I’m now working toward getting my driver’s license which will open up more options for me. I try to practice driving when I can.”

Jeff says Tommy has successfully completed his training and no longer needs community skills training through Life & Work Connections. “He is proud about getting to use his new skills in his job. I’ll never forget Tommy’s big smile as he was telling me about successfully advocating for more responsibilities at work. I look forward to hearing about how driving is going.”

“By the time I was caught up on my goals, I feel confident,” says Tommy. “I think I’ve been doing the right things. I feel like I have accomplished a lot.”