“Learn how to cook – try new recipes, learn from your mistakes, be fearless and above all, have fun.” – Julia Child 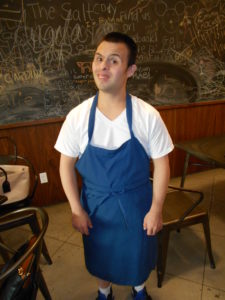 Daniel’s ready to make the donuts!

Daniel has been working on expanding his cooking skills the past few months. He signed up for a cooking course through the Columbia Area Career Center which took him on two fun and flavorful adventures. “Daniel was interested in taking a cooking class and this seemed like a good fit for him,” says Alicia Lindsey, direct support professional in the Supported Living program. “He got to meet several other people also interested in cooking and baking.”

The first of the two-part class consisted of learning to make donuts at Harold’s Donuts. Harold’s had different work stations set up at their store and class participants had the chance to make dough, cut donuts, and roll donut holes. They also got to watch the donuts being fried and then had the opportunity to frost the fresh donuts and finish them with a variety of Harold’s signature toppings. “Daniel’s favorite donut that he finished was one with maple frosting and bacon,” says Alicia. At the end of the night, all the participants left with a box of donuts they had finished. “It was fun,” says Daniel. “I’d do it again!” Daniel proudly shared his donut creations with his neighbors the next day. “I honestly think that was Daniel’s favorite part of this experience,” says Alicia. “Sharing the donuts he made really made him happy.” 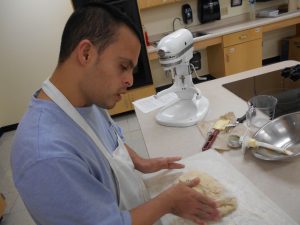 Daniel kneads the dough for his holiday bread recipe before letting the dough rise.

“It was exciting to see Daniel’s enthusiasm the day following his cooking class! He excitedly told me how he brought home some donuts to happily share with some of his neighbors,” says Kristi Palmer, site manager for Supported Living.

The second part of the class brought Daniel to Rock Bridge High School to learn how to make holiday bread in their classroom kitchen. “This class was more hands-on. The instructor gave Daniel the recipe and had the ingredients and tools ready for him to get started,” says Alicia. “He measured the ingredients, made the dough, and kneaded the dough – which he seemed to enjoy.” Alicia said Daniel liked this class as well, but it wasn’t as much fun as making the donuts. Once again, he took home his creation to share with his neighbors.

“Daniel has talked about being a chef for years,” says Kim Tolson, site manager at Daniel’s apartment building. “It was neat to see his dreams come true!”

At home, Daniel is committed to trying two new recipes a month to expand his cooking skills. “He doesn’t always want to try the new recipes,” says Alicia, “but after some convincing, he’s usually happy that he did.” Daniel’s favorite food to make at home is white pizza – a pizza with alfredo sauce instead of tomato sauce. Perhaps Chef Daniel will share his recipe?