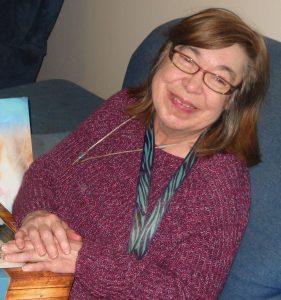 Carol and her amazing smile!

Boone County Family Resources Supported Living program is celebrating a milestone birthday for one of its participants. Carol has been a part of the Supported Living program since 1987 and she’s celebrating her 70th birthday in January. Carol is described as having both an infectious laugh and smile. She enjoys cooking and has many cookbooks on her bookshelf. Carol remembers food that her mother made her when she was a child and often likes to makes those foods on special occasions. She takes great pride in her job at Central Missouri Subcontracting Enterprises (CMSE) and is one of their longest standing employees. When she’s not working, she enjoys spending time at home with her cat, Butterscotch. She also likes to read various classic novels, but also newer classics such as Harry Potter. Carol reads the newspaper and watches the news to stay up on current events. Having lived in Columbia for her whole life, Carol is also very knowledgeable about Columbia and Boone County. Various BCFR staff members share their memories of working with Carol.

“Carol has the best smile of just about anybody I know!”

“Working with Carol over the past couple of years has truly been fun. When I first started working with BCFR it took her a little bit to get use to me. I fixed that by talking about Harry Potter and the bond began. One of the things that I enjoy most is when Carol starts to laugh at some of my corny jokes or comments. She especially got a good chuckle one day when I went to pick her up from CMSE and there was some sort of beetle or bug flying around and I took off running from it.” 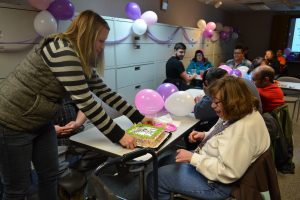 Carol gets ready to blow out the candles on her birthday cake.

“Carol wants to succeed and be as independent as possible! She enjoys going to work, like it is her second home and enjoys actually working while there.”

“I love that she bases her morning food choices off of the weather.”

“I remember when we went on vacation to Branson and we went to a musical performance Carol laughed so hard at a guy dressed in a very large bikini outfit singing to “Yellow Polka Dot Bikini.” We returned back to the cabin we were staying at and Carol was still laughing about it.”

“I love that she likes to make homemade recipes that her mother use to make.” 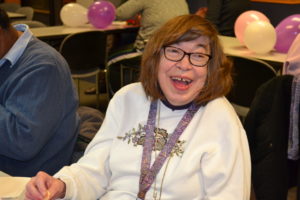 Carol was very surprised by the party. “Is this all for me?”

“Who is Carol? Primarily, Carol is honest. I have never heard Carol speak something she would consider a lie and the concept of ever doing so does not cross Carol’s mind. Carol has an easy smile and enjoys the give and take of a good joke. Carol’s laughter is infectious and she can brighten a room full of people when she becomes amused. Carol is set in her ways. She likes what she likes and don’t you dare try to get her to try something different. Carol is a kind soul who enjoys showing gentle affection to her cat or reading from her Bible or various other books in her free time. Carol is a daily reminder to hold yourself to a higher standard as what could be more important than the care and support of such a wonderful human being.”

The Supported Living staff planned a special surprise party for Carol a few days after her birthday, which falls on New Year’s Day. She came to the Friends Room at the BCFR main office and was stunned to see several staff and fellow Supported Living participants had all come together to wish her well. “Is this all for me?” she exclaimed. “I don’t believe it!” Later she said, “I was wondering why they wanted me to come to the main office.”

Guests shared snacks and birthday cake and took turns talking with Carol. The whole group sang “Happy Birthday” and Carol enjoyed a birthday dance. “I’m going to be 70 all year,” said Carol. “This is fun.”