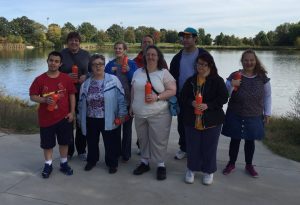 In the fall of 2016, Boone County Family Resources began an agency-wide initiative to enhance the health and wellness of individuals served. A 12-week long curriculum from the HealthMatters Missouri program was used to bring together persons served to promote physical activity and healthy eating habits. This was a natural fit for the Life & Work Connections Transition Network Fitness Achievers class to join in on this initiative.

Every Tuesday and Thursday afternoon for an hour and a half, the Fitness Achievers met with a group of other individuals served by BCFR to discuss their health and complete some fitness activities along the way. The number of participants varied, but there were 6-12 people attending each class throughout the 12 weeks. Due to the unseasonably warm weather this autumn, the group often met outdoors at local parks or took walks together around downtown Columbia. 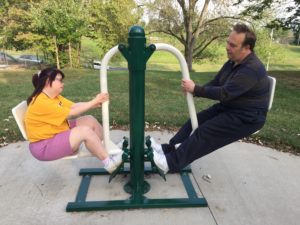 Jane and David work together on the circuit training at Lions-Stephens Park.

“I noticed one particular individual who started with Fitness Achievers went from being quite shy and withdrawn to speaking more with others, increasingly engaging in activities, and developing the skills to interact independently,” says Jeff Mueller, Program Coordinator at Life & Work Connections.

The first half of the program focused on a range of topics including setting and meeting personal goals, working through obstacles and temptations, the importance of hydration, sleep and staying active. Walks outside to enjoy the weather and the changing colors of fall was a favorite activity, but the group also tried dancing, kickball, tennis, basketball, and circuit training.

The second half of the program focused on learning about good nutrition and eating habits. For the group’s final gathering in December, everyone completed a worksheet on what they had learned during the program and then they celebrated with healthy snacks and a dance party.

At the end of the program, Alyssa said that she enjoyed attending the classes. “I learned about what is healthy to eat and also how to get more exercise.” Jane and Daniel both said they liked the dancing the best. Jeff says he also saw Betty’s willingness to exercise improve. “She has knee trouble and she was reluctant at first and became more participatory toward the end. She was also walking further at the last sessions than at the first – she originally was asking to sit down and rest a lot at the beginning.” 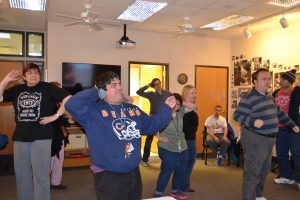 The group follows along with an instructional dance video to round out their HealthMatters
classes.

“This 12 week class was a great opportunity to pair a national health curriculum for individuals with developmental disabilities to a class the agency was already providing in Fitness Achievers,” says Jessica Porter, Coordinator of Training and Quality Assurance for BCFR and the liaison for the HealthMatters program. “Individuals had a great time doing activities like kickball, walking, flying kites, basketball, tennis, dancing, or even yoga at the same time as talking about health goals and the importance of a well-balanced diet. For me personally, it was amazing to connect with individuals over mutual goals to get and stay healthy throughout the fall months.”

Jeff continues, “I think HeathMatters was beneficial because, in combining it with our existing fitness group, Fitness Achievers, we had a wider array of participants who were afforded greater social interaction opportunities, and the opportunity to form more positive associations with the concepts of health and exercise. I think for many people, social interaction is a motivating force toward greater health.”

HealthMatters, Missouri is a health promotion initiative aimed at improving health and health promotion of people with intellectual and developmental disabilities (I/DD) throughout the state of Missouri. Formed from a partnership with University of Missouri – Kansas City (UMKC) Institute for Human Development (UCEDD) and eitas – Developmental Disability Services of Jackson County, the program assists organizations and agencies like BCFR with promoting healthy lifestyles to people with I/DD while meeting the requirements of the National Core Indicators, or the standard measures used across states to assess the outcomes of services provided to individuals and families.