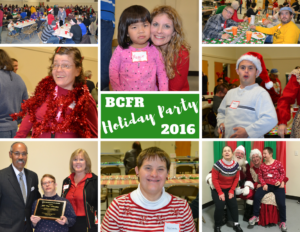 On December 1, Boone County Family Resources celebrated with persons served and their families and friends at the annual agency holiday party. This year BCFR broke tradition and sought a new space for the popular event. “Our agency has grown, we’re serving more than 1,700 people now. It was time to find a larger venue so that we could continue to safely have fun and celebrate,” says Robyn Kaufman, Executive Director at BCFR. “We are grateful for the partnership we shared with the Cosmopolitan Club and the use of their facilities for so many years.”

The new location, Knights of Columbus Hall, is on the opposite side of Columbia from the old location and there were some concerns among staff that people would have a hard time finding the new location. “We had a record attendance this year!” says Robyn. “I think our concerns were for all for nothing. Everyone seemed to find the new location and enjoyed having more room to visit and celebrate.”

The annual Holiday Party is sponsored by the Friends of Boone County Family Resources. During the event, The Friends present the recipients of the Super Sibs Awards – an award that recognizes a sibling of an individual with special needs for the supportive, and often times difficult, role they play as a contributing member of the family. This year’s recipients were Nicole Rose Ream, sister to Eli and Levi, and Shanae Butterworth, sister to Jonathan and Savannah. 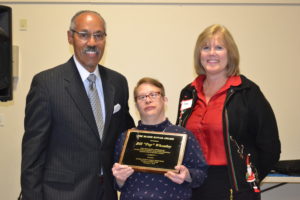 Pop Wheatley poses with Janis Eimer and Robyn Kaufman. Janis’ mother was Marie Kovar, after whom the award was named.

Also presented that evening was the recipient of the 2016 Marie Kovar “One Who Made a Difference Award.” This award is presented annually to recognize persons who have made outstanding contributions to bettering the lives of persons with developmental disabilities. This year’s recipient was Bill “Pop” Wheatley, a paraprofessional at Columbia Public Schools. Pop was joined at the event by his family and several of his co-workers from Smithton Middle School. He was nominated by several parents of Smithton students supported by Pop as well as some of his co-workers.

BCFR would like to thank the many supporters of the annual Holiday Party including:

The date has already been set for next year’s event – Thursday, December 7, 2017. We’ll see you there! If you are interested in becoming a supporter of the event, please contact Sherry Wohlgemuth, Outreach & Referral Coordinator at 573-874-1995 ext. 160.