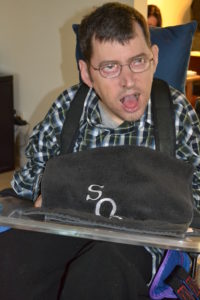 Jim is settling into his new home & enjoying Columbia.

Jim is already enjoying his new living arrangements after moving into an independent supported living home. He and his mother and step-father moved to Missouri this summer from Illinois. They chose Columbia through a family recommendation. “My sister works at the University and had encouraged us to look into relocating to Columbia based on the services that would be available for Jim,” says Brenda, Jim’s mother. “We are happy with our decision. There seems to be so much more available here.”

For most of his 42 years, Jim has lived at home, however, Brenda and her husband, Roger, are getting older and felt it was time to transition Jim to a residential setting. Jim lived in a couple different supported living homes in Illinois. “Jim just wasn’t getting the care he needed and there was little to no community access,” says Brenda. “He’s a very social person and enjoys getting out of the house. When my sister convinced our aging parents to move to Missouri to be closer to her, we decided to also move.”

Upon arriving in Missouri, Jim lived in a nursing home as he awaited finding a suitable residential location. Brenda and Roger would pick him up every day and take him out in the community to get acquainted with Columbia. “Jim likes to go shopping, go to sporting events, go fishing and just getting out and about,” says Brenda. “We really like Columbia so far. The fact that Jim actually had choices of where to live is impressive. In Illinois, we looked all over the state to find one residential setting that would meet Jim’s needs. Here, we had three to choose from in one town.”

Jim moved into his new home just five days prior to this interview. “I’ve already seen a big difference in his demeanor,” says Kristyn Schnakenberg, Jim’s support coordinator. “He just seems happier. The first night he moved in, he went to a party. In our recent meetings, he’s been smiling a lot more than usual.”

Brenda agrees that Jim is happier. “This is such a good match for Jim,” she says. “This is a nice home in a nice neighborhood. The staff is learning Jim’s routine and schedule and seem very open to getting to know him. They are going to remodel Jim’s bathroom to better meet his needs. And there seems to be no hesitation on getting him out in the community.”

Kristyn says the strong natural supports provided by Jim’s parents helped make the process of finding Jim’s new home easier. “I’ve never worked with a more engaged and caring family. They work hard to advocate for Jim and make sure his needs are being met.”

Within the first week of living in his new home, not only has Jim attended a party, but he’s also been to an MU women’s basketball game and has plans to attend the “The Price is Right Live!” – a staged production of the popular television game show. His home is just a block away from a city park which Brenda says will be explored soon. “There really is a lot to see and do in Columbia. We are looking forward to Jim having so many opportunities to engage with his new community.”