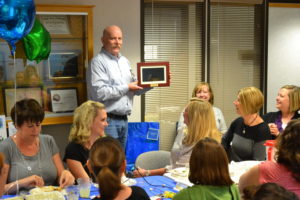 Michael poses with a digital picture frame gifted to him from the BCFR staff at a special luncheon in his honor.

Michael Gibson worked with BCFR for 33 years and 9 months before his retirement on October 31, 2016, so he is this edition’s Employee Spotlight as we honor his many years of dedicated service.

Michael held the titles of Computer Consultant and Data Process Manager prior to 1991, when he became the Director of Administration and oversaw the Administrative Team, facilities management and many other day-to-day responsibilities of keeping buildings, equipment and staff functional. Beginning in 2010, as Information Systems Director, Michael managed the agency’s expanding information and security systems.

Michael developed a client information system in the 80’s that was ahead of its time and helped BCFR enter the electronic age. The system not only allowed the agency to track and report demographics, training objectives and progress more efficiently, it was a key component to increasing the quality and innovation of services provided. Mark Satterwhite, Director of Life & Work Connections, remembers, “Many years ago, Michael told me about the “Internet” as he prepared for a conference presentation on the information system he developed. ‘It’ll be huge,’ he prophesied.” Indeed, his prophesy about the internet and all it would bring has evolved and Michael continued through his tenure to research and identify new technology to address BCFR’s future needs and possibilities.

Robyn Kaufman, BCFR’s Executive Director says, “We have been fortunate to have someone with experience, education and passion for both working with people with disabilities as well as computers.” Michael’s passion for supporting and respecting individuals with disabilities germinated during experiences at a summer job in a habilitation center in Marshall, Missouri and was nurtured by subsequent jobs. Resourcing staff with technology that serves the programs and the individuals has been the perfect fusion of his passion, creativity and expertise. Michael’s interests and talents went far beyond his role as a “techie”; he enjoyed chatting with both coworkers and persons served on numerous topics such as horses, gardening, or music. Michael’s “can-do” attitude, his expertise, wit and passion are celebrated and missed around the halls of BCFR. We wish him all the best in retirement.