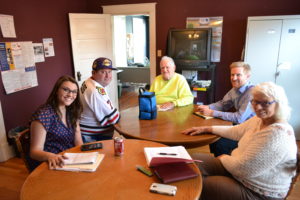 In October, which coincidentally was National Disability Employment Awareness month, the agency formally partnered with Missouri Vocational Rehabilitation (VR) to pilot an evidence-based supported employment program commonly called “IPS.” The Individual Placement and Support program has at its core a “zero exclusion” principle — meaning everyone who wants a competitive job is eligible, and the job search is immediately “on.”

Brad aspires to work in a kitchen, doing food preparation. His previous work attempts have not been satisfactory or successful, yet his aspiration still burns bright. Given that, Support Coordinator Jake Rodemann referred him to VR who connected him  Life & Work Connections for a fresh look at supporting his employment goal.

Another principle of IPS involves the assembly of a committed team, where each member plays a key role in supporting the employment goal. Communication and cooperation among team members, sustaining a spirit of optimism behind Brad and his goal, are considered critical to its achievement. Community Employment Specialist, Rachel Murphy, interviewed Brad to ensure the job search is consistent with his interests and abilities, and set out immediately to meet with prospective employers — two other core principles of IPS.

Brad had a hot job prospect with Cheddar’s restaurant. Rachel supported him through the interview process and he was offered a job pending successful completion of orientation. “I’m excited,” says Brad. “I love restaurant work and it’s what I’ve wanted to do since I was a kid. It’s like a dream come true, really.” Brad’s opportunity is food prep — with the possibility of cross-training to supplement the cook when business is hopping. “I believe I can do this job,” he says. “I’ll be nervous at first I know, but it’s like that with any job.”

Brad’s team shares his optimism and will follow him along with encouragement and support as he continues his job at Cheddar’s and hopes to settle in for the long term. Whether he is successful or not in this first IPS vocational endeavor, his team will be behind him. Tish Thomas, State Trainer for VR, reminds us, “There are no failures in IPS, only lessons learned.”

We commend Brad for continuing to pursue his dream, and wish him success in its fulfillment.