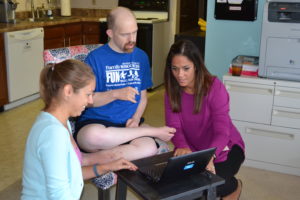 Kristi, John and Natasha set up the Skype call with Joan in Minnesota.

John, 46, has been participating in the Supported Living program since 1989. He grew up in Columbia with a brother and a sister in a close-knit family and up until a year ago, he would spend every weekend with his mother at their family’s home. Family is very important to John. When his mother, Joan, needed to relocate out of state for health reasons, BCFR staff assisted John in taking a trip to visit her and John’s sister this past summer. Family drove him up to Minnesota for the visit and then staff drove him back home to Missouri. Even though the trip went well, it is not something that is feasible more than a couple of times per year. However, using available technology, BCFR staff found a way for John to visit with his family whenever he wanted.

Despite the long distances between them, John can now stay connected with his mother and siblings through Skype, a type of video calling. “John’s not crazy about talking on the phone,” says Sue, John’s sister. “He’s engaged a lot more when he can see our faces on Skype and he’ll talk to us for longer periods of time.” 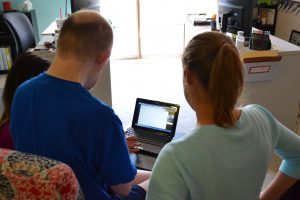 John and Kristi talk with Joan using a small laptop with a webcam. “I could see John’s new haircut,” says Joan. “It’s even better than getting photos when I can see him smile on my laptop!”

“It’s a lot of fun to be able to see John while I’m talking with him,” says Joan. “It helps me, too, because I’m so far away. I really miss him.” Joan says Kim Tolson, Site Manager at John’s apartment building was instrumental in setting up this new communication technique for the family. “We’re going to use Skype a lot more often now that we know how easy it is to use. I don’t need any fancy equipment, I can just use my laptop.”

“It’s definitely been a good way to stay connected with my brother,” says Sue. “I really appreciate that the staff was able to come up with a solution that John seems to prefer.”

John has a goal to Skype with his family at least once a month and now staff is also using the video calling for John’s annual plan meeting with his support team. “It makes John happy to see his family on the screen and he definitely contributes more to the conversation now,” says Kristi Palmer, Site Supervisor for Supported Living.

“Consistency is important to John and he has such a close bond with his family,” says Natasha Grayson, Assistant to the Director of Supported Living. “The creative problem solving of our staff has made a difference for John and his family and helps them maintain their strong connection even if they are miles away from each other.”