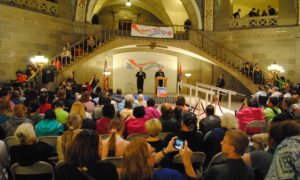 Advocates gathered early in the legislative session for a rally at the capitol (Disability Rights Legislative Day), uniting behind several legislative priorities including HB 1565.

On Thursday June 9, Governor Nixon signed into law House Bill 1565. This law will increase the asset limit for people enrolled in the MO HealthNet (Medicaid) program. The asset limit has not increased in over 45 years, so this is welcome news to the disability community. “Asset limit” refers to the amount of money Medicaid recipients can accumulate and still be eligible. Starting in July 2017, the dollar amount increases to $2,000 (from $1,000) for an individual, and to $4,000 (from $2,000) for a couple. Each following fiscal year, until 2022, the amounts will increase by $1,000, reaching $5,000 for an individual and $10,000 for a couple. Annual increases after 2022 will be tied to cost of living adjustments.

Such changes in the law don’t just happen. They result from well-coordinated advocacy, and many advocates deserve credit for seeing HB 1565 all the way through the legislative process and finally to the governor’s desk. This includes advocates from Columbia and Boone County who wrote, called and visited their legislators regarding the need for an adjustment.

Jason Mize, Vice President, People First of Boone County, was one of many local advocates who spoke with legislators about HB 1565. “It’s important to get to know your legislators,” he says. “I know my state representative and the other representatives from Columbia on a first name basis. We talked to them about HB 1565 and they were all supportive. I think a lot of legislators from all over the state could not believe how long the asset limit has been the same… since, like, the 1960’s.”

One of the principal shepherds of advocacy around HB 1565 was Public Policy Director Cathy Brown, from Paraquad in St. Louis. “People with disabilities are twice as likely to live in poverty as any other minority population,” she says. “When a person with a disability needs access to services that are only available publicly, he or she must often times get — and stay — as poor as possible for as long as possible. Our system inadvertently creates dependence instead of maximizing the independence of beneficiaries. Changes like the asset limit increase move us closer toward a system that encourages maximum economic self-sufficiency.”

Representative Kevin Engler, R-Farmington, filed HB 1565. “This legislation is long overdue and it helps to correct a flaw in the system,” he says. “By raising the asset limits, we are removing a significant disincentive for the elderly and people with disabilities to be prepared for expenses they may incur.”

Congratulations to advocates from across the state for achieving this tangible result!

[NOTE:  You may recall last year Missouri also passed the ABLE Act, which allows for disability-related savings accounts that would not impact Medicaid eligibility. Sign up for email notifications  to stay informed about the Missouri ABLE Program’s progress.]