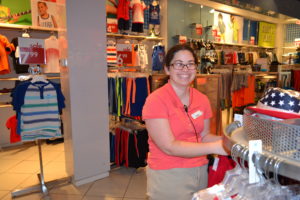 Mariah pauses for a photo while on the job at Children’s Place in the Columbia Mall.

Mariah started vocational skills training as a member of the BCFR Life & Work Connections janitorial work crew in mid-2015 to develop the skills she needed for a job in the community—such as communication, attitude, teamwork, networking, problem solving, and professionalism. While participating in the skills training with the BCFR work crew, Mariah was also working with ACT Career Services on finding a suitable job in the community that fit her employment goals.

After several months on the crew, Mariah was promoted to Provisional Janitorial Office Attendant where she learned about administrative tasks as well such as stocking office supplies, using a binder, and completing other small administrative duties which expanded her skills.

BCFR Community Skills Specialist, Mary Breight, was Mariah’s supervisor in this role. “Mariah is an excellent worker,” says Mary. “She paid attention to detail, improved on work pace, and always got the job done correctly.”

Just a month later, Mariah was hired though ACT Career Services for a sales associate position at Children’s Place, a clothing store at Columbia Mall. “I like working at the mall,” says Mariah. She says she enjoys her job and her favorite part of it is the environment in which she works. “My supervisors and co-workers are helpful.”

“This is a great example of ACT Career Services and BCFR working together to support Mariah and ensure her success,” says Mary. “When I first met Mariah she was very shy, but through vocational skills training, she began to radiate a quiet confidence. I have no doubt she will succeed in her new job and beyond.”