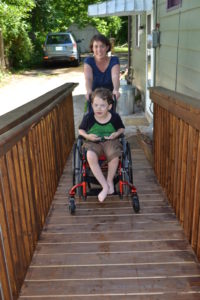 Robyn pushes Harry up the wheelchair ramp after playing in the yard.

Sometimes it is necessary to make physical modifications to a home in order to enable more independence to a person with a disability. BCFR can assist with home modifications, especially those which are necessary to ensure the health, welfare, and safety of the person served.

Harry, uses a wheelchair to get around, and when he was smaller, his mother Robyn would lift him up and down the front steps to get into their home. As Harry grows, it gets harder for Robyn to lift him and getting him from the house to the school bus was becoming a real challenge. Robyn says both she and Harry have fallen while trying to lift him up and down the un-accessible entrance to their home.

Harry, who participates in the Partnership for Hope Waiver, was able to use funding through the waiver to get a wheelchair ramp built on their home. “It’s been a big step for Harry’s independence,” says Robyn. “He has even used the handrails on the ramp to brace himself to take a few steps independently.”

Robyn says over the years they have made many other modifications to their home to help it be more accessible to Harry, but the ramp has been the biggest one so far. “It has made things so much easier for us.”

Katie, who also uses a wheelchair for mobility, has been receiving services from BCFR since 2000. After graduating from MU with a finance degree in 2014 and getting a job at the Harry S. Truman Memorial Veterans’ Hospital in 2015, she decided it was time to purchase her own home. However, her new home needed several physical changes in order for Katie to live there independently.

Katie and her father did a lot of research about the kinds of changes she would like to see in the home including a complete renovation of the bathroom. Using Medicaid Waiver funds, Katie worked through BCFR to completely rearrange the location of the fixtures in the bathroom to make it accessible and functional for her needs. She picked out a sink that would let her get her wheelchair underneath so she could use it better. The shower has a small lift in it to make getting in and out of the shower easier.

“Everything works great and it’s a lot better than it was,” says Katie. “I couldn’t even get in the bathroom before. I’m glad that I was able to get the home modification completed. The costs and difficulty to do all the bathroom work ourselves would have been too much.”

Examples of other home modifications to improve access and independence in a person’s home that BCFR can assist with are: