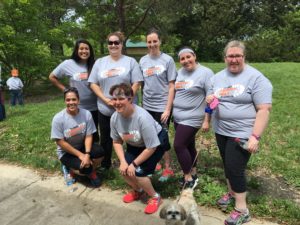 In early May, two Supported Living participants and five BCFR staff joined together to support the Freedom Walk – a 5K walk to raise awareness and funds to fight human trafficking through the organization Central Missouri Stop Human Trafficking Coalition and Project Rescue.

The event was hosted by C2 Church where Katie is a member. She said her church has been raising funds and supporting this cause for a long time. She brought the idea of participating in the 5K walk to her roommate and staff members. “This was my first 5K,” says Katie. “It was hard, but I finished! I couldn’t have done this a year ago.” Katie says she feels more inspired to get out in the community and do things after participating in BCFRs Supported Living program. “In my old house, I didn’t get out much and wasn’t very active. Here, it started with living upstairs and having to walk up and down the stairs in my apartment building. It helped me get more active. I also can use the treadmill downstairs which I like better than going to the gym.”

Shaina, Katie’s roommate, did not need much convincing to participate in the 5K walk. “I like to be active and it was fun that the BCFR staff was also doing the 5K with us.” Shaina began her commitment to fitness a few years ago when she trained for the Roots & Blues & BBQ 10K race and lost more than 60 pounds in the process. “I might try for some other races this year,” says Shaina. “It’s fun.”

Katie said she has lost 11 pounds since she moved into her apartment. She says training for the 5K and walking more everyday helped, too. “I knew I had to be ready to walk six times around the lake at Bethel Park, so I tried to walk every day to get ready.”

“It was so neat to see Katie take the initiative to start her own team, and to see how dedicated she was to training for the 5K,” says Kim Tolson, Site Supervisor at Katie’s apartment. “It was clear that this was very important to her. It was also nice to see so many community members out supporting a great cause. Everyone was so supportive and was giving each other words of encouragement to finish the 5K strong.”

Katie says her favorite part about participating in the Freedom Walk was that her mom’s dog, Lily, walked with her, too. “Lily did two laps around the lake, which is a lot for a 12-year-old dog to do. But she did it!” When asked if she would participate in another 5K, Katie says she might do another one at some point. She liked that her efforts helped raise money for a good cause, too. “I don’t know how much money was raised, but I think it was a lot. There were a lot of people at the 5K.”