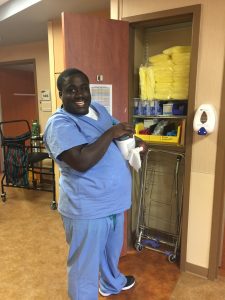 Javion smiles while on the job at Boone Hospital Center.

As a senior in high school, Javion was very focused on getting a job and less focused on completing school. Through encouragement from family and his support team, he took advantage of an opening in the Seamless Transition through Enhanced Partnership (STEP) Program for the 2015-16 school year to complete his education. The STEP program, a partnership between Columbia Public Schools (CPS), Alternative Community Training (ACT), Vocational Rehabilitation, Boone Hospital Center, Boone County Family Resources (BCFR), and Missouri Department of Mental Health Central Missouri Regional Office, is designed to improve employment outcomes for youth with developmental disabilities.

Instead of completing their senior year at high school, the STEP participants spend the year on site at Boone Hospital. Academic learning administered by CPS instructors in a classroom setting provided by the hospital is strengthened by real-world work experience in various departmental internships.

Javion thrived in the STEP Program because he could see results from applying what he was learning to the work that he was doing in his internship. “Through direct feedback on-site from supervisors, Javion knew he was doing a good job,” says Christi Brown, a Community Skills Specialist at BCFR who has worked with Javion for the past four years. “The on-site experiences were more concrete to him versus working for a grade in the classroom and not seeing those results right away.”

Through his internship at Boone Hospital, Javion proved to his supervisors and co-workers that he was dependable and responsible. Before the semester was completed, Javion was offered a full-time position at the hospital working in patient transport – getting patients from one area of the large medical center to another. “Javion is a natural fit for a job working with people. He is friendly, outgoing and talkative and he’s very excited to join the staff at Boone Hospital Center,” says Christi. “I’m proud of his efforts to complete this program and I look forward to what the future brings for him.” Javion started his new job on May 2.

Now that Javion has met his goals of graduating from school and finding a job, he and Christi are working together on the next steps toward a goal of moving out on his own. “Javion is focused on the next stage of his life and he’s ready to start working toward those goals,” says Christi.