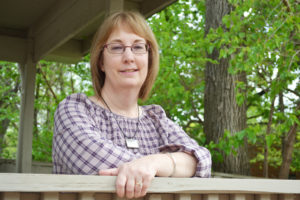 Q: What is your favorite thing about your job?

A: My favorite thing is definitely the people, whether they are clients, family members, coworkers, or staff from other agencies. I have met so many wonderful people over the years.

Q: What brought you into this field?

A: I worked at a grocery store while attending MU and some of the individuals from Woodhaven came in regularly to shop.  I enjoyed getting to know them and later applied to work at BCFR after seeing an ad in the paper.  I was studying rehabilitation (drug & alcohol) counseling but decided I liked working in this field better.

Q: What’s something most people don’t know about you?

A: I have been continuously employed since I was a senior in high school but have only worked for three companies.

Q: What are your hobbies outside of work, if any?

A: I don’t do them as much as I would like but I enjoy working on genealogy, sewing, crafts, reading, gardening, cooking, and anything with my family.

Q: Tell a little bit about your family…

A: I’ve been married to Colby for 24 years. We have two sons, ages 19 and 15, and a daughter, age 17. We also have three rescued Schnauzers and four horses. Our oldest son receives services from BCFR and now works at CMSE. Colby and I were both born and raised in Columbia and my kids are 4th generation Kewpies. I found out my grandfather was even the quarterback in 1936 when the Kewpies won the state championship! He died when I was three but I am so fortunate to have been close to three grandparents. My other grandfather was a psychology professor at Mizzou (and my unofficial advisor) so of course I am a Tiger as well as a Kewpie.

Q: How many years have you been with the agency?