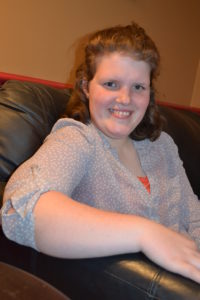 Anna’s schedule has become very busy these days. She’s an active 25-year-old woman who works part-time, volunteers twice a week, plays several sports and still has time to squeeze in some “girl time” with her BFF. “I like to keep busy and I like being around people,” says Anna. “No sitting around on the couch for me!”

Anna began receiving services through Boone County Family Resources in 1996. Through the years she’s accessed different services and supports, but after attending Camp Barnabas during the summer, she learned about Barnabas Prep, a college-like experience where she would live for nine months during the year with 11 other students and attend classes focused on developing life skills and vocational training. “This was a great transition step for Anna,” says Denise, Anna’s mom. “Anna learned so many things and really began to see her own potential and her own future.” Anna had a roommate and learned how to get along without help from Mom and Dad. Anna says her favorite part of Barnabas Prep was learning how a small business operates as she and her classmates learned how to make, market, and sell cinnamon rolls. The students earned enough money through their efforts to take a week-long cruise to the Caribbean. “The cruise was awesome. We had such a good time,” says Anna.

Denise says Anna’s experiences and successes at Barnabas Prep then lead the family to consider the THRIVE program at University of Central Missouri in Warrensburg. “Anna was ready for this next level of independence and the academic focus that THRIVE was offering.” THRIVE, which stands for Transformation, Health, Responsibility, Independence, Education and Vocation, follows the same academic calendar as a typical college program is housed on the University of Central Missouri campus. The focus of the first year of the program is on developing self-responsibility through life skills classes. The second year, students create resumes, practice job interview skills and explore career opportunities. Anna says she really enjoyed THRIVE and was proud to report she was elected class president and achieved the honor of being valedictorian of her class. “We wanted the same opportunities for Anna that we had for our other kids, but we didn’t know if it would be possible. We are really proud of her for all she has learned,” says Denise.

Anna participates in the Partnership for Hope Medicaid Waiver and after she graduated from THRIVE, she was determined to put her skills to work. She started working with Mary Breight, a Community Skills Specialist at Life & Work Connections, and soon began volunteering at the VA hospital. “I’ve gotten to know a lot of people through serving coffee at the hospital. I also don’t mind getting there early because there is always stuff for me to do,” says Anna. With the ultimate goal being to land a job in the community, Anna and Mary kept working together and things soon fell into place for a job for Anna at Hy-Vee where she is a Food Demonstrator. She says she really likes being able to talk to the shoppers while she’s providing samples. “I also like to do the food preparation. My favorite to demo is fruit or pizza. I’m supposed to try the food I’m demonstrating, too, so I can tell people about it.”

“The managers at Hy-Vee have been wonderful,” says Denise. “They are very accepting and supportive. They see the potential in Anna and have asked her to try other jobs when they need her help.” Anna said she recently learned how to bag groceries and has also assisted in the meat department and the bakery. “I really like my job,” says Anna. “I never get bored. There is always something to do.”

When Anna’s not working or volunteering, she’s practicing with her Special Olympic teams for both swimming and volleyball – both of which just started back up for the season. She’s also participated in bowling and had the opportunity to represent Missouri in the Special Olympics US Nationals in 2010 for track and field in several events. “I’m a runner!” says Anna. “But I had to quit track and field because practices are on one of the days that I usually work.” Denise says balancing work, volunteering and sports caused Anna to have to make some tough choices on how to spend her time, but she stands by her decision. “Making choices is part of growing up and Anna understands this well,” says Denise.

With a new goal of moving into her own apartment in the community, Anna and Mary Breight have switched the focus of her Community Skills training from getting a job to developing the necessary independent living skills to achieve this milestone. As a first step, Anna has moved into a “mother-in-law suite” in her sister’s home down the road from her parents. “She’s doing quite well,” says Denise. “She’s close by our house, but not under our roof. She’s getting the experience she will need to succeed in living on her own.” Anna’s so committed to her goal that she and Denise attended and spoke at the public hearing for BCFRs tax credit application for the building of universally designed, affordable housing for people with disabilities. “I would be excited to live in the new apartments,” says Anna. “I would get to live downtown and be able to use the buses to get around, I could be roommates with my friend, I would be close to BCFR if I needed something, and I would be living on my own.” Denise smiles as Anna describes her reasons for wanting to move out on her own. “It would be sad to me if she couldn’t use all these skills that she’s worked so hard to achieve.”

Rachel Turnbull works as Anna’s Support Coordinator at Boone County Family Resources and says she’s proud of all that Anna has accomplished since they’ve met. “Anna is an amazing young woman,” says Rachel. “She’s not afraid to try new things and work hard toward her goals. It’s been a real pleasure to get to know her and her family on her journey toward independence.”

More adventures await her this summer as Anna recently completed training to be a mentor at Camp Barnabas. This is the first time a camper has been offered a role like this and it seems like the position was created just for Anna. She will get to go back to where it all began and help other campers see their potential to take on the world—just like Anna has.