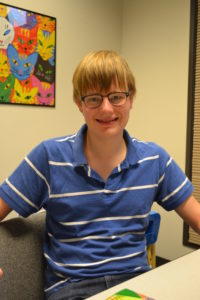 Isaac’s pursuing a part-time job in his career field as he completes his college degree at MU.

Isaac is a charming 22-year-old college student who carries on a lively conversation – especially if it revolves around sports or travel. He began receiving services from BCFR in 1999 with a diagnosis of pervasive developmental disorder. Over the years he has received various supports through the agency, but most recently was referred to Vocational Rehabilitation as he is focused on pursuing a career in the field of accounting. Isaac works with a career specialist through ACT Career Services and has been very proactive in working toward his goal of employment.

Isaac is a senior at the University of Missouri enrolled in the Accounting program. He is set to graduate in spring of 2017 from the five year program which will earn him both his bachelor’s and master’s degrees. From an early age, Isaac says he has loved working with numbers. As a young adult, he says he also enjoys managing his own finances. He’s taking 12 hours of classes this semester including taxes, managerial accounting, and working on a double major in geography. During his free time, he’s been actively pursuing a part-time job in the community.

“What impresses me most about Isaac is that he takes the lead role in his job search,” says John McNail, Isaac’s Support Coordinator. “Isaac comes to his employment-related appointments with job leads in-hand and a plan for following up on recent applications he has placed.” Isaac says he uses several online resources to research job opportunities and has had several interviews for positions in retail and business offices. “I haven’t found a position just yet,” says Isaac, “but I’m not giving up!”

Isaac recently had the opportunity to interview with a locally owned employment management service. Isaac’s knowledge of accounting software and ability to problem solve impressed the management team. Isaac and his Career Specialist remain in contact with the company and there is current discussion about a position being created specifically for Isaac. As of the time of the interview, Isaac was still hopeful for the position, but he had no new information to report. In the meantime, he keeps looking and applying – all while staying on top of his class load.

Isaac says his favorite college course so far has been his geographic information systems (GIS) class which is no surprise as he has a talent for navigation. He independently drives to St. Louis to catch Cardinal’s games and in what he describes as his “biggest moment yet” he had the opportunity to study abroad in Italy this past summer. “When classes were done for the week, we had free time to do what we wished. I wanted to travel around Italy to see the sites,” says Isaac. “I went to Pompeii, Florence and the beach – all independently in a country where I didn’t speak the native language. It was my proudest moment so far!”

As Isaac settles into the semester this fall, he says he enjoys going to the MU home football games and working out at the Recreation Center. “The MU campus is a very nice, compact campus. I like hanging out at The Shack and doing homework and watching whatever game happens to be on at that moment,” says Isaac. In between homework and attending sporting events, Isaac says he likes to think about his dream job – which would be working for Deloitte in St. Louis. “Have you seen their building? It is right near Busch Stadium. You can probably look out the windows on the top floors and see right onto the field.”

We wish you the best of luck in your job search and finishing your college career, Isaac!